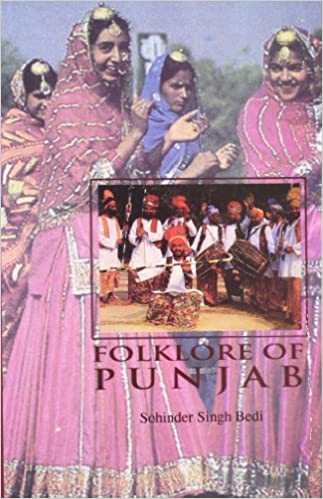 I am a Punjabi, so it felt strange to read about one’s own state in an academic book. But a lot of the things that we see around the house are rarely explained by the elders in their right context. This book provides the academic and cultural background that really helped one understand my own state better. After this, I am quite looking forward to the other books in the series that we have at home.

This is not a collection of folk tales. In fact, this is a rather academic book about the culture of Punjab. The culture it references is the culture of undivided Punjab – some of the folk songs and myths are clearly associated with pre-partition Punjab.

The book starts easily enough – with a description of the land and its brief history. It then moves to myths, magic and religion etc. I didn’t enjoy these sections because much of this is not relevant any more. The fun started with the fun and fairs chapter. I loved reading about the main fairs of Punjab, and then the language and dialects. I didn’t know that Punjab has Jhumar dance too! And a variant of the Gidda called the Sammi. I also liked the part about the folk performers of Punjab. Punjabis are a very jovial community, so I was researching Punjabi folk humour performers for a while. This book answered that question, albeit briefly. I am still looking for a more detailed description of Punjabi folk performers who were in the humour genre. All leads welcome.

The appendices, which mention some riddles, sayings, and other folk content, really opened my eyes to the intellectual superiority of the people of Punjab. The riddles were as intelligent as the Sanskrit riddles one reads. That was my favourite part of the book.

While the writing style is rather narrative, this book covers many aspects of cultural anthropology in a succinct manner. If cultural anthropology is a field of study that interests you, then this entire series of books by National Book Trust, focusing on one state at a time, is a treasure trove. People are not just individuals, there are so many cultural bricks in the foundation of our personalities.

One, the Sikhs were not given adequate representation in the book. The Sikh culture is predominant in Punjab, yet the myths and superstitions pertained to the peers and valis, which were more prevalant in Eastern and Mughal led Punjab.

The second issue with the book is that it glosses over the social ills of Punjab. The caste system, the rampant female foeticide and the tacit cultural approval that makes the practice so prevalant. Without taking a stand, it was still possible to mention them as clearly as the valis and other myths and magics were mentioned.

The third issue with the book was not enough illustrations. Culture and anthropology is one area where a picture is worth a thousand words. The plates were grossly inadequate, given the rich subject matter of the book. A simple picture of Sammi and Jhumar, for instance, would have made a world of difference.