Have been wondering about how, in a planet full of people, we manage to find friends .. who remind us of ... well, us.
Just when you think that finally, the big churning pot called the World has sucked one in, and there will be no more madness, just method.. along comes Polly, who puts the kettle on, and reminds one that madness is not a habit, its a character trait.. and it cannot be wished or punished away.
And how does one manage to meet other mad people so effectively? Who share our exact mental malady, more or less?

To the mad caps(you know who you are): May the tribe increase!

These are the posts that brought one to them.. one did not go.. the posts practically got them:

I am not a driver. I am an insurer.

I am not a driver. I am an insurer. Just by being in a bigger vehicle, i have automatically insured everyone in a smaller vehicle against their own stupidity.

Everytime a 2 wheeler driver thinks of overtaking me from the wrong side, they do not have to think about simple things like giving a horn or an indication that suddenly, the left side of the vehicle is going to be scaled by them. If there is a vehicle ahead that prevents their victory, and if, per chance, they bump into my vehicle and injure themselves, it is magically my fault, and automatically, a crowd gathers, expecting me to reimburse the guy for his injuries. Last I checked, You did not pay me an insurance premium for guarding u against ur own lawlessness and stupidity.

To the cyclists:
To the adrenaline pumped 2 wheeler drivers:
What, really, is your excuse, other than that you can get away with it?
YOUR TWO WHEELER IS NOT YOUR WILD CARD ENTRY TO THE FORMULA 1.
There are rules. Please follow them. When you don't follow them, don't create a mob and expect the other person to pay up just because 50 of you have surrounded him.
And the end note:
One day, yours truly was at an intersection where, the day before, two scooterists were crushed by a blue line. This is a T intersection. On the long arm of the T, a blueline bus was waiting for the signal to turn green. As soon as the signal turned green, the bus started moving to the left (there was no free left) . Within 2 seconds, a scooter appeared on the right of the bus, overtaking it from the right just as the bus reached the divider on the left. This scooter, instead of stopping and waiting for the bus to make the turn, cut and appeared right in front of the bus just as the bus turned into the divided lane. The bus driver screeched on the brakes to avoid crushing them. The pillion rider turned back and grinned shamelessly at the bus driver. I was too busy observing these 2 to see what the bus driver was thinking or saying. But one could say what one was thinking - Those 2 deserved to die.
Disclaimer: Not all 2 wheeler drivers are bad. Not all bad drivers are in 2 wheelers.
at 15:18 12 comments:

Email ThisBlogThis!Share to TwitterShare to FacebookShare to Pinterest
This post is about: Experience, India, Opinion, Personal responsibility, Society

Sensitising a child to blindness and impermanence

Sorry, there is nothing interesting to report on this blog.. but there is some really interesting stuff on the other 2 blogs, so permit me to direct ur attention to these 2 posts that i think readers of this blog shld read:

Sensitising a child to blindness - on the Esha blog.

When you find a Ghazal you love...

Rough translation:
The one who teaches us to love without fear,
is also the one who puts the fear of separation in our heart..

Love fills me with the desire to soar
And also turns my wings to stone..

O God, you sure give me all the pain destined for me
Where do you hand out my share of happiness?

Only Love can give enough courage
To fight the world alone...
From: Tum Milo to Sahi ; Sung by Kunal Ganjawala.
at 14:25 7 comments:

Movies are like paintings. Some(like Traffic Signal) are landscapes - they tell a story about things that just ARE..and no matter how long you stare at the landscape, the scenery remains unchanged. Some(like 3 idiots) are caricatures. Some (like all Amitabh Bachan movies) are portraits - focusing on one character and everything else is part of the background. Some, like Das Kahaniyan, are clearly collages. And some, like this film, are like the picture below: 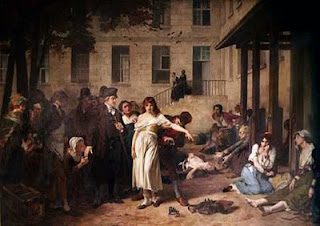 where each character is so well etched that its complete in itself, and yet, every character merges effortlessly into the overall story. Their stories, distinct yet interlinked, not like the Gordian knot, but like a beautifully designed tapestry pattern. This film was a delight to watch.

Its a difficult film to review, because one cant talk about the costumes, the art direction, the lighting, the story or the songs, in isolation. If anything, this movie has a... "well blended" feeling to it, where everything falls into place just so, and nothing (except Amit's confession at the end) is jarring or stands out. The climax was predictable. But the film wasnt about the climax. This one time, the journey mattered more than the destination.

One cannot NOT talk about Dimple and Nana. Where have you guys been? When one looks at these performers, the difference in the sheer level of experience is not funny. Even within the film, though the entire cast acted way better than average, the shots which had Dimple and /or Nana just plain stood out. Dimple has a stage presence that lights up the screen just by being in it. Even if she is in a corner of the frame, you will notice her. ONLY her. She was flawless. Mohnish Behl dissapoints. Or maybe one just expects too much out of him now. :-)

The title track deserves special mention. Its rare to find a single song that easily captures all the required situations in a film. And rather easily. With fantastic lyrics. And good singing.

The last film that had such awesome characters that stayed in mind was DDLJ. No kidding. Rocket Singh was a very well written character. But as a film, it has to be DDLJ, where every character had a place and was "well thought out and well executed." Not to mention, perfect casting.

In the end, it all boils down to just one question: Will I see it again? Yes, and then some more.

To the Esha Blog please..

Today, i m celebrating a small thing at Esha, that has never happened before. Please go to the blog www.eshabraille.wordpress.com and read about it.

Since its an imp day (for a small reason, but imp nonetheless) , one cant help looking back. 3 years ago, when one started Esha's employment for the blind initiative, it was a lonely battle. No one else seemed to believe that the blind cld become entrepreneurs - service entrepreneurs at that, and make money at it. No one seemed to believe that a business could be run without an "office" - using telephone and email, and working after office hours on flexi hours (Both Chandrashekar and i work flexi hours, as do all the other Esha volunteers)

3 years later, Chandru has proved that it IS possible, and i cant thank him enough. Even more so because for all the subsequent searches for an Esha beneficiary, i havent been able to find the same grit and determination to succeed. But 3 years later, a lot more ppl now believe that its possible for the blind to be entrepreneurs.

Hats off to Chandru, for ensuring that we can all believe in a model that i cld only envisage, and he could make real enough to prove.
at 03:38 5 comments: