Holla! Remember the Esha 100th post where we announced the Google of Audio books?

If you do, you will remember that we mentioned that the search database is:

Only you can make it happen. Please, please volunteer to enhance this search engine and the tree structure.

It is pure data entry and editing work. It can be done at any time. You can even devote 15 minutes a day.

If you can join hands to bring more and more audio books directly to the blind, please drop me an email at eshabraille@gmail.com

We invented the Sanskrit Script?

The Sanskrit script, belonging to the Aryans, is considered the most scientific script in the world. It is exactly phonetic, it has a separate place for vowels and for consonants, and the consonants are arranged in a scientific manner. How cool is that?

Except that, there is a doubt that is nagging the back of mind for a while now. The Aryans, no doubt traveled from the West to the East. It is widely believed that they brought Sanskrit with them. However, the scripts of the entire route taken by the Aryans, are based on the alif, be, ABCD, alpha beta gamma.. NOT the vowel  - consonant differentiation . The European scripts have no vowel consonant differntiation at all. The middle eastern scripts have this differentiation, but the basic structure of the alphabet remains aliph , be...

Something happened, in the movement from Persia to India, to cause the creation of a script that is organised fairly differently. What was it? I havent been able to find an answer to that one. Neither in the head, nor in the research papers online. There are pointers to an ancient Indian script called the Brahmi script. Am impressed with what one knows about the Brahmi script now.

But the Brahmi script could not have come from the West. For the simple reason that the Brahmi script has two major differences  - One, it makes it possible to represent vowels separately, and Two, the breakdown of the alphabet itself, into the now familar and almost universal ka - kha - ga- gha - Dha.. that we know from Hindi, Sanskrit, and every other Indian language. This phonetic(based on which combination of the tongue-mouth-lips was used to create the set of sounds) breakdown of the alphabet was just not there - not even as an idea, in any other script. Thats why i refuse to buy the argument of an Aramic parentage of the Brahmi script or the Sanskrit script. Influence, yes. parentage, no. (There is a reason why i m leaving Kharoshti out of this.)

My hypothesis is that this script, the structure of the script, and the layout, was worked out right here in India. I started with the hypothesis that this script was in some way derived from the Indus Valley script, or from the other native civilisations. That the Aryans adopted the principles of the native script and then, as is characteristic of them, obliterated all mention of the native scripts and that the new script has only learnt from the original. However, there does seem to be a bridge script - the Brahmi, which is dated at about 3rd - 4th Cent BC. I think the date has to be before that. Why? Because, if at this time, Ashoka got his edicts carved on rocks to be put up all over the kingdom, a certain level of literacy among the subjects will have to be assumed. That means that the script itself, should have been widely understood and used before those rock edicts were created.

All scholars indicate little knowledge of what India used from 1500 BC - the estimated end of the Indus Valley civilisation,to the 3rd Cent BC - when the Brahmi script was used by Ashoka in his edicts. (If you know of anything from this period, please do point me to it)

However, i have not been able to shrug off the pictoral similarity in the 2 scripts. (Indus Valley and Brahmi) 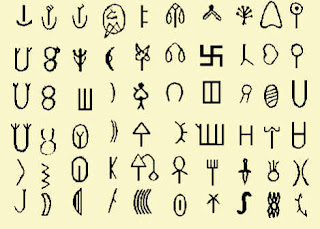 The images on top are simpler, but there is an amazing pictoral similarity.
This is the entire set of the Indus Valley symbols.

Soo.. we took the symbols from the Indus Valley civilisation people, added elements of Aramic, and slowly refined the script to its most scientific form, right here in India.

Investment strategies my grandparents taught me..

1. Plan for the biggest expenditure first.
2. If it doesnt make common sense, then it doesnt make any sense.
3. Protect your assets and dont blame the managers.
4. While running after Lakshmi, NEVER overlook the importance of Saraswati (meaning, if you have 2 potential partners - one, whose ability to create material wealth is proven but his maturity is slightly lower, and second, who will not help you make as much money, but is a more mature/ wise person, go for the latter.)
5. ALWAYS use a part of your income for charity, and make sure your children know of it.
6. There comes a time when any incremental wealth / income will give u disproportionately more heartburn/ stress. Know what that point is for you. Dont go beyond it.
7. Remember that the reason why you are trying to make all that money, is to be able to sleep peacefully. And remember that peacefully is the key word.
8. Gold never grows old.
9. Dont invest in stocks. Invest in businesses. And then stay.