Today's message : We first focus on the tangible - the mantras, the breath, the shloka.. then slowly, the intangibles take over - the joy of meditation, the peace that one gets. From there, we move to Nirankar - where we ARE the Brahman. And it doesn't matter. There is no accomplishment. Only a sense. Or lack of it.
at 01:01 1 comment:

Like all Sanjay Leela Bhansali films, this one is grand.

The music is given by Bhansali himself. And Pinga, the song, truly does stand out. But the rest of the music is not memorable.

As an experience, it is complete. When you leave that theatre, you carry back a story. That travels with you. Which is what good story telling is all about. If you are like me, you will also cry in some parts.

Thankfully, the movie completely underplays the mush and focuses on the political milieu that led to the tragedy of the love story.

Ranvir: What a performer! When I entered the movie, the thought in head was that the hero was a casting mistake. But 10 minutes into the movie, I knew it wasn't. This man *was* the character.

The casting is, in fact, perfect. Every single actor does justice to the character. And every character does justice to its existence. Like a chess board, the pieces are balanced, their juxtaposition carefully crafted, their interplay, mesmerising like a dance sequence.

Priyanka Chopra and Deepika are both perfect. No surprises there.

But what totally, completely blew me away was the background score. From traditional Indian beats to the final battle - where Western classical music was used. If you close your eyes, you will not know that you are sitting in a Hindi film.

And I would especially like to mention the use of light in at least 2 sequences - the battle of Bundelkhand and the imprisonment of Deepika at the end. In both places, light was used to generate an effect of its own.

At the editing table, I can only imagine the agony of the person who would be responsible for cutting out pieces with so much beauty. They made one mistake though - Ranvir positively did not need to sing and dance. No really, that song is an eyesore. The music, choreography, the whole thing.. its 5 minutes of pure torture. The concluding sequence in the Narmada river which is a Ranvir solo also should have been edited to a much shorter duration.

A Bhansali film is an extravaganza - a sort of feast for the senses and the heart. The entire experience of Navarasa. It manages to weave a coherent story. And tell it well.

When your heart goes out to the man who, in spite of being the most powerful man in the Maratha Empire, cannot get a name for his son. When you look at a woman saying "Khuda Hafiz" to her child for the last time.. and something inside you snaps, you know you have taken your heart to the Adventure Park, and treated it to the roller coaster ride.

This one is a must watch! For adults only. Children not recommended.
at 22:04 3 comments:

This is a folk tale that I heard as a child and it had a deep impact on me.

Review of Tamasha - the Film

Perhaps the critic in me speaks before the viewer .

The use of music is great, the cinematography does justice to the location - Corsica, France. The mimicry act by Ranveer adds to the viewability. But I couldn't help missing Nargis Fakhri in a similar role in Rockstar. I think Nargis did better. And Ranveer was repetitive.

And... you can't make up for a non existent, weak script. A strong story, perhaps. A boy finally comes into his own after abject failure on all fronts. But it didn't leave that strong an impact. There were too many distractions. Or maybe I am not qualified to watch the fillum.

As a viewer, good light hearted fun, excellent locations and some amount of wit.
The "Let me find my own  destiny" storyline is now done to death - Almost as much as "rich boy-poor girl" or "lost in mela" plots of yesteryears.
All in all, for the same story, Rockstar was better. WAYYYY better.
at 14:24 1 comment: 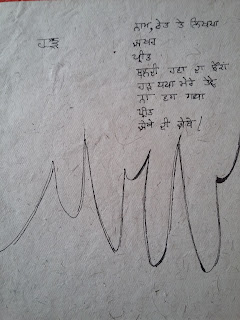 ਹੜ
Name
Is letters written on sand
Love
is the gently blowing breeze.
There was once
a flood in my courtyard
The name was washed away
But Love remains
right where it was.

These theories have been on my desktop for at least a year. The more I explore them, the more I believe in them.

For what they are worth, sharing them here.


Theory 1: The Vedic people were not ruthless attackers. They were colonisers rather than sudden attackers. They were nomads with a strong military knowhow, who came to the largely mercantile Harappan society and , much like the European model in the middle ages, explained the importance of security. They then took up the “job” of security – more likely in some parts more than the others, and went on, just like the British, to rule. The story of the frog king who hired a snake to fight off rival frog princes, and was eventually eaten up by the snake. Probably, the Harappans did gather some military resources and strategy lessons as time passed, but in the end, they were not victorious.

Theory 2: The Harappan script is not a literary script. The seals are again, mercantile rather than literary. A mercantile script is a method of codification – communicating the most information in the least possible symbols. So each line on the seal is important, but just like the modern Mumbai dabbavalaas, it is a code, and not a script by itself.


The seals were used to denote trade transactions and not literary content. It was not a method of writing stories. At the very least, this means that the script had:

The fact that the seals were designed for multiple times use indicates very strongly that the Harappan people had, in fact, standardized SKUs( Stock Keeping Units) – a very advanced feature of trade economies which we believe was brought to India by the MNCs.


Theory 3: This builds upon my earlier work that the structure of the Harappan script is more native to India than any Western influence. But when we look at the structure of the script, we realize that it is not for a written script, but for a society where the accuracy of oral rendition is of utmost importance.  Not only are the vowels and consonants separated, but within that, the consonants are arranged by the parts of the mouth that are used. If a child learns this structure, they are very likely to be able to make no mistake in the language itself when they use it. Furthermore, to arrive at this scientific gradation requires in depth study of sounds and their physiological source, which is not possible without there being a formal program for research and a significant sponsorship for the adoption of this method. The hypothesis is that the Harappans used this structure to teach “language” to their children, and the Aryans, having found that this is a much better way to understand sounds than their own structure, adopted it gradually and then claimed it as their own. They probably gave written symbols to the structure already being used, but they did not create that phonetics based structure.

Theory 4: Were the Harappans the modern Tamils  or Dravidians?


I base my hypothesis on 2 things:


First, the geographical location of the Sindhu valley – as early as 4500 BC, the Sindhu valley did not have a known presence of the Negroid people. That region is more suited to the presence of a race more capable of withstanding the cold temperatures of the region. As part of the evolutionary process, any people living there, would have had to have light skin, to absorb more sunlight. The high melanin content, a trait of the Negroid race, would have been a significant evolutionary hurdle in that geographical location. Just as the Aryans and the Caucasians share the same ancestry, yet the Caucasian race calls the Aryans “brown”, the Aryans probably found the native people darker than their own skin, but that alone should not lead us to believe that these people had the pigmentation of the Negroid race.


Two, Assuming that there was a mass attack or a colonization. Now, if you were a mercantile civilization, with already established links, you were more likely to travel in a direction that you know, than in a direction that you do not know. Which means that the Harappan people, assuming that they had to move, would have been more likely to approach their mercantile contacts in the West, rather than move to the jungles on the East and travel through them all the way to the South. The chance of survival was greater where there is a trade and you know how to make money. The jungles, on the other hand, need survival skills that were not the strong area of the Harappans, though the Aryans would have been completely at ease with the idea of exploring virgin terrains.


So, I believe that the Harappans were connected, to a limited extent, with the other cultures of Hindoostan only to the extent that their river systems interacted and depended on each other. But they did not move through India to eventually settle at the edge of the peninsula.
at 08:05 3 comments:

So, someone on facebook put up a "Toddler Dictionary" .. which was a little like tearing the seams of my motherly heart.