On Discipline, Children, and parenting

Someone in a parenting group asked:
I wonder why imparting Discipline is mostly equated to lack of love, care and empathy and why should discipline stifle creativity?

Let's address the question in 2 parts:
Why is discipline equated to a lack of love?

But what makes discipline undesirable is not the clash itself, but the child's perception that this clash is a function of lack of love, or that it somehow stifles their independence.

Was it always this way?

Yes. The id and the super ego have clashed forever. BUT, by the age of 4 or so, Indian children have typically been conditioned to view discipline as the route to a better life. That is why we have 5 year olds practising Bharatanatyam.

So, what changed in the last few centuries for the Indian child? Greater self awareness? An altered concept of self?

Let's read on to find out.

Tangential Detour: One of my most lasting impressions came from an image in an old book (I found it on the internet): 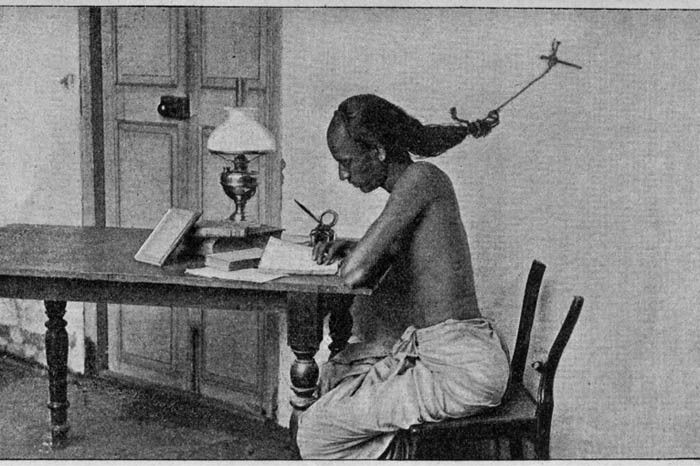 If the child finds itself nodding or drooping from sleep, the hair will tug and the child will be awake.

No one forced the student to do this. Why was this student, and many others like him, doing this?

That question explores the 2 completely divergent emotional responses students have to discipline.

So, how did we get from the student above to the children today who equate discipline with emotional ruin? (The original poster also drew a comparison with the Gurukul system, so I am going to address that too)

400 years ago, we had Victorian ideas like "Children should be seen and not heard." . This led to a lot of child abuse in Europe. Children were routinely starved and beaten in the name of discipline.

Why did a similar idea not lead to child abuse in India?
Because the Indian social structure was different.

Joint Families
Unlike Europe, in India, we typically had joint families. So, the Man of the House had no absolute authority to practise physical violence. There were other members of the family.

Close Knit societies
Social censure, or "What will people say?" was, and continues to be, one of the greatest deterrents in India. It was important to keep up an image of being a morally right family.

Absence of formal schooling
Majority of children learnt AT HOME. They were expected to go into caste based vocations and formal education was considered, at best, an enabler.

The idea of taking money for educating someone was considered rather sacrilegious. This meant that vocational training happened at home, with one's own families. (You will still find this big time in jewellers, potters, weavers, and other skill based vocations).

Against this backdrop, early on, children knew that discipline and training was the route to success. The ONLY route to success. Discipline then became a symbol of a parent's love, and an integral part of growing up. It was a hygiene factor in the life of a child.

The importance of community
You view something as being negative or positive only if its optional. Let me give an example - Most children today don't view healthy eating as optional. All parents enforce it and all children follow. But if some children are allowed pizzas everyday and some children are made to eat Dal, the children eating dal will get the idea that it is optional to eat healthy. It is exactly the same with discipline. Even 50 years ago, discipline was not an option. Children stopped playing with you if you were not disciplined. A mistake by one member of the family placed a blotch on the name of the entire family.

Did it lead to abuse? Yes, in some cases. But the design of the educational structure was non-abusive. Discipline was woven into it automatically. Krishna, for all his pranks, still took the cows out to graze with his elder brother, even as a child.

The Gurukul system and discipline
Let's understand the Gurukul system. There still are Gurukuls - the KangDi Gurukul in Haridwar and I think some gurukuls in the South. But, by and large, the ideas of how to run a Gurukul, are only a remnant of what we knew. As part of an earlier initiative, I spent a LOT of time trying to understand Indian education techniques. Gurukul, obviously, was one of them.
Those who want to understand the Gurukul system better, Amish Tripathi's book comes close - the Suryavanshi system in the first book (except that the parents took their own children back)

But here are some key tenets of the Gurukul system:


Were Gurukuls loving places?
We are all human. Which means that universal answers don't apply. In my view, the Gurukuls were run by gurus for the love of learning. Usually, the gurus chose their ashrams in secluded parts of the forest, where the students worked to make a pleasant sanctuary. There was everything that goes into the practice of a good life  - hard manual labour, specialised learning, weapons training, agriculture, dialogue, play, meditation, and a good routine.

Does discipline stifle creativity?
I'm not a specialist - done or read no great study on the effects of discipline on creativity. So, this is  an anecdotal answer.
I love painting. And dancing. I can't do either. Because I did not learn.
Until, one day, I realised that even to truly enjoy my passions, I need to learn more. And all learning needs.. that dreaded thing... discipline.
Now, one can choose to reinvent the wheel, of course, but turns out, I am not a genius of that category. I definitely cannot create the Natyashastra out of my head. However, after learning the techniques, I was able to create more, based on the body of knowledge that already exists.

Discipline is not an end in itself. It is only the means to an end - learning and growth is that end. Only the student decides what and how much they want to learn. Their discipline comes from within. No one from outside can dictate that.

Sushant Singh Rajput was not a suicide

And then, when the headline flashed, I thought it was my brain playing tricks again. "No baba, he is not dead. Its you thinking of things that are not true. He will not commit suicide. He is a successful actor and extremely intelligent."

Only, it wasn't my brain playing tricks. He had been declared dead. But it was not suicide.

I followed him on Twitter. This was a young man with a LOT of interests. Even if he had failed in the film industry, he would have done something in physics. The list of people he followed on Twitter had NO filmi junta except the folks we know to be hardworking. In short, no celebrities. This was not a person whose self concept depended on films. Or anyone else.


Update: Later, it has emerged that when he thought he has been ousted by the film mafia, he wanted to go and do organic farming in Kerala. But even if that was not the case, he would have found something to do.

This is a video by an ex RAW official, and the pointers he gives deserve attention.

This was not a suicide.

Is Depression an infectious disease?

Wow, no?! 4 friends committing suicide one week after each other. How amazing! Did you know that depression is infectious and spreads among friends? I didn't either.

Its been over a month, and the hype around his death refuses to die. I hope that remains. I hope that this death (which is not a suicide) serves some purpose. And I have a sneaky feeling that it will. Far too many people not willing to let this go.