Why do Indians celebrate the anniversary of a violent event by dancing in a flash mob?

Indians have a treatise on everything - dance, economics, public administration, grammar, mathematics (includes physics, chemistry, and astronomy). The record keeping system of Benares is one of the most accurate, the most longstanding genealogy documentation in the world. Why, then, do we have so few books of history? Why do people say that Indians have no sense of history?

If these are some of the questions in your thoughts, then you are at the right place of wondering.

Dear Children: This is a book written for you. And my advice to you is: Read your school textbooks for the marks. THIS is the book that you should read to understand your history.

This book covers an incredibly long period of history in a very pithy 256 pages, with many illustrations and maps.

At no point is the reader bored, or overwhelmed. The book flows like a story, going easily from one period to the next, largely in chronological order, and at a couple of places, taking steps back and forth.

Since history is multifaceted, the book obviously does not cover all chronological events and all the facets of our history. But it does give us a very good sense of our past, and a couple of things that the book took some time to explain, are really important, and not often found in history books:

A. The continuity from IVC to ancient Indian history to the modern age. We are the same civilisation.

B. The importance of maps

D. The difference between the Western and Indian concepts of history.

Of the three, the first and the last are truly mindboggling. You will never see the world the same way again.

I think that every Indian child, and indeed, every single Indian should read this book. Since Sanjiv Sanyal is also an economist, he also brings in a very valuable view - the share of India in global GDP over the centuries. This information is shared, not in a boring tabular view, but with context at the right places. At one time, Indians became overly obsessed with puritanism. Not coincidentally, that was also when the growth of India stopped, and our share in global GDP reduced. Over a period of time, this closed mind led to our losing the technological edge that was always ours. From being the pioneers in steel weaponry, we were laggards in modern warfare.

There are many lessons in this book, and many stories. Like Gibran, this book will bring different things to different people. But to everyone, it will bring something worth treasuring. 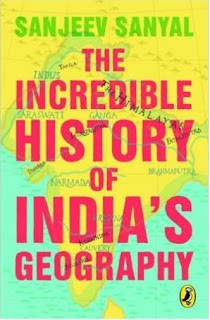 What an interesting thing this is! Your arrogance both belies and befits your ignorance.

I am yet to meet the 'genius' part of every 'misunderstood genius' I have ever met.

You are either insulting my intelligence, or demonstrating yours, darling. And they are both bad ideas.

You must always design for mediocrity. One can either be mainstream, or excellent. Never both.

Now remember, my dear, before we open our mouth, we must open our mind.

The Big Lie in our history

Here are the characteristics of a period in Indian history. Can you guess the period that is being described?

1. The civilisation is, at its core, a strong mercantile civilisation, where money is the prime objective of existence, and other things, like fine things, houses in a good location, access to good civic facilities, the derivatives of that core objective.

2. There is a mature political and civic structure. This was a civilisation that was not given to small, petty, internecine wars. They had the maturity to design and build political systems for scale - most likely, a loosely held federal system.

3. Clearly, environment was not high on the political agenda. Nor were farmers given the pride of place in the political establishment, thinktank, or the decision table.

4. The mature political structure ensured that small and large kingdoms reside in relative peace, with very little need for wars and weapons. What spies can do, the soldiers do not need to do. Much of the state's budget went towards civic work, administration of trade, capable ministers and a spy mechanism. Wars were rare and when they happened, decisive.

5. Education was a priority in this civilisation. Education ensured the continuity of traditions and knowledge across many centuries and generations - largely unchanged. But the knowledge imparted in this educational system was not deadwood. This was active education that imparted the best lessons of the past and encouraged readers to develop those ideas more, and then share them with a larger world.

You cannot guess. As this video shows, large kingdoms, or peaceful federal structures that provided stability and peace, were the norm rather than the exception in most of ancient India and as this article shows, in much of Asia. Even today, India is one of the most diverse countries held together by a single political system. This level of unity simply cannot be imagined in some of the other parts of the world.

But, who were the bullet points for?

They were for the Saraswati or Indus Valley civilisation. (You can read the original bullet points below). But when I removed the specifics, I realised that they could apply just as easily to Ashoka, Maurya, Guptas, Nandas, Shungas, Satavahanas, Kushanas, Pratiharas, Harsha, Chalukyas, Rashtrakutas, Cholas, in short, every Indic empire.

One of the most distinguishing features of the IVC has been city planning. But is city planning really unique to IVC and only IVC? Let's see.

The cities have been well planned from Ayodhya (Ayudh - meaning, so secure that no war can take place there) to Ujjayani, our popular literature abounds in well planned, beautiful cities. Even Megasthenes and other travellers have written about the beautiful, vibrant cities of India and the fares sold in its markets. (Padma Priya adds:)  In the South, Madurai and Poompuhar in Sangam literature, and the story of Silapathikaram where Kannagi the protogonist burns the city down are very well known. Mamallapuram, Mahabalipuram - Pallava dynasty, Kumbakonam, , Thanjavur, Gangaikondachozhapuram - Chola period.

Dwarka and Indraprastha in Mahabharata are both well-planned cities which were planned before they were inhabited - indicating the existence of town planning as a discipline and as a thought process. City Planning was and has been integral to administration all over India for all time!

Why is this important aspect of our history not understood better?

I have slowly come to the view that a BIG lie that has been perpetrated about the Indus Valley civilisation is that the inhabitants of these places are now lost to us. Their genetic material, their language, their culture, and beliefs present no continuity.  This is simply not true.

I think that the first thing we need to believe is that much of our civilisation is owed to the very intelligent people who lived in one of the most fertile river valleys of the world. The people whose cooking vessels look just like ours, whose toys are a lot like ours, and whose characteristics have not changed in the last 4000 years and counting.

Read points 1 to 6 again. Other than education, which has been messed with by Macaulay and then our own Education ministers, which part is, even today, untrue about India? And even on Point 5, Indians continued that education inside the houses, so that the elements of our culture and civilisation are not lost.

Here are the original bullet points:

1. The civilisation is, at its core, a strong mercantile civilisation, where money is the prime objective of existence, and other things, like fine things, houses in a good location, access to good civic facilities, the derivatives of that core objective.

3. The 700 year long drought proves that clearly, environment was not high on the political agenda. Nor were farmers given the pride of place in the political establishment, thinktank, or the decision table. A civilisation that had most things codified to a science, did nothing to understand the earth, and what it was trying to tell them. It was simply not important enough.

4. The mature political structure ensured that small and large kingdoms reside in relative peace, with very little need for wars and weapons. What spies can do, the soldiers do not need to do. Much of the state's budget wen towards civic work, administration of trade, etc.

5. Nalanda and Takshshila were universities built at a scale that was far ahead of their times. But a university is not something that sprouts. Centuries of a formal educational establishment provides the guidelines needed to set up and successfully run a university. The level of expertise that we observe in the IVC also proves that there was constant improvement and successful transmission of knowledge. The seals were codified yet universal. This can only mean that the knowledge of how to read the seals was at one time, universal.

As I move to the later Indian texts - the Panchatantra and the Arthashastra, the universality of the thought processes becomes evident to me.

The script is undecipherable - to most of us, yes. The Gonds claim that this is the same as their current script and the Gond hairstyles and garments being very similar to the ones we find at IVC lend credence to their claim.

But, the Gonds are not inherently urban or mercantile. I think that they are a very important piece of the picture, but the overall picture is a rich tapestry that is still being lived out in every part of the country.

We can understand the past much better after we understand its connection with the present. Once we acknowledge these similarities, it is a quantum leap in our understanding of that esoteric civilisation.

But there is no archeological evidence for it.

The DNA evidence of the Rakhigarhi skeletons conclusively proves that the DNA is the same as that of the current occupants of Rakhigarhi villages. The skeletons belong to the late Harappan period. So there is genetic continuity at least from there.

Here's the thing: We get nothing absolute from archeological evidence. We always have to interpret the archeological evidence to create a narrative. In creating the narrative of what we have got from the later periods, we have ignored their similarity to the artifacts of the IVC. Therefore, a story of non-continuity has emerged. But if we view the 2 pieces together, we see that there is similarity - enough to indicate a continued tradition.