The review is easy - if you love music, this is one show you must watch before you die. It should be on your bucket list. And you must see it - as soon as you can.

Yes, some productions are like that. They can be summed up pretty quick.
at 00:06 2 comments:

I was not born to a cocoon
Merely
sentenced to one
so I could emerge
radiant, ready, ripe.
But that's not how it played out.
When I emerged
I found
Ridicule, leer, criticism
That's how I retreated
to the cocoon
forever.

This is not
a genetic mutation.
Merely
A personal response
to your collective stimuli.

The Moth who wouldn't be Moth

Many years ago, deep, deep inside a forest, there lived.. a tiny little moth. During the day, it feared for its life, and at night, it feared the dark. The only time it could go out to feed was at dusk and at dawn, when it wasn't bright enough for others to see him, and wasn't dark enough for him to be scared.

In time, it was time for the moth to grow and multiply. But the moth's child was an imp! Like all larvae, it ate and ate and ate. Besotted it was with the rainbow and the colors of the flowers and the leaves on trees and all things bright! Explain as he might to the child, the moth could not make him see sense: "To be a moth, you have to be invisible. Your safety depends on it. Your whole life depends on it! If a moth were to be as bright and colourful as the butterfly, why, it would die in a day! And then what is the use of being so colourful and bright? "

But the moth child, he paid no heed. Inside the cocoon, he prayed and prayed and wished and wished. What did his father know about desire that burns so much, that one would rather go up in ashes realising that dream, than live in the ashes of the dream? His father didn't know that. But he did.

One day, the moth child just KNEW that when the cocoon falls off, he will not be a grey-brown moth. He will be the MOST colourful, amazing, resplendent moth in the history of moth-hood! And some smart bird with sharp eyes will spot him within an hour of being born and will eat him up. But what did that matter? It would be an hour, or a few moments even, of being ALIVE.

As the time approached, he waited for the cocoon to fall off. But it wouldn't. He was comfortable inside the cocoon, but bored. And it was time. He couldn't wait to find out! Inside the cocoon, all was dark. He didn't know who he had become. Or What. He KNEW inside his heart, but there was no way to find out.

Outside the cocoon, the moth father waited. He wanted to see if his son had realised his dream. He wanted to be there to protect him, just in case the young fool really did do something rash to his appearance. But he waited, and waited. The cocoon was not even drying up, much less falling! The other moth kids came and went, but his son, just NEVER did anything on time!

Finally, at long last, and just when the father was about to give up and fly away to grieve for his son, the cocoon, started to fall. A little at first, but enough for the moth child to gather his courage and try to get out. So he tried, and tried, and tried. And got out.

The father could not believe his eyes! This was not a moth child at all! This was just.. someone else!
The newspapers of mothworld in the jungle came for interviews. The moth child was all over the news! So well protected was he, and so well taken care of, that no one dared to attack him, much less devour him. He was venerated wherever he went, even by those of other species. Everyone asked him how a moth could do this - be so colourful and bright and ... multi hued? How does a moth become a butterfly in the shape of a moth?

The moth child didn't know. He couldn't answer those questions. He tried to tell them that it was just the desire that burned him from within - that he wanted it so bad, and prayed for it so hard that God just found a way to give it to him. But the news reporters would have none of that. Prayers and desire and stuff was just not a "Story" . They wanted to hear about his 'miracle recipe', his 'magic potion' , the special things he did as a larva and pupa to come out like this. The father and son scratched their heads and then gave up.

They just decided to call him "Steve Jobs". And let publicity do the rest. Very soon, someone wrote a  biography. There was merchandise. People paid him just to use his name. They were rich. Very rich.

One day, the son sat in silence at their mansion. The father walked up to him and asked him why he was so silent. Very slowly, the son replied, "The MOST Important part of my story, Dad, was the Fire. They paid for my story, but they never got the message, did they?"
The father replied, equally slowly, "Son, they got what they wanted to get."

Note: This story is based on a picture created by my friend. This one: 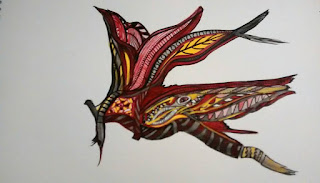 Read this book in a flight. I was looking forward to Krishna Sobti's book about men. So far, I have only read her in "Ae Ladki" and "Mitro Marjani"

I have to admit.. the crassness of the language got to me. I do believe it was possible to write about the subject (a govt office in the 1980s) without the at-least-5-gaalis-a-page ration.

The absence of a plot strikes one early on, and is a regret that stays till the end. There are no nuances to explore, and no layers to unfold. Just a whole series of crass dialogues spewed by characters at random intervals, and some characters pulled literally out of thin air and then left to rot, without maturing them or giving them a personality.

I left this book in the aircraft. You can save money by not buying it.
at 01:15 1 comment:

How do you hold a moonbeam in your hand?

Time to confess: I was a problem kid.

Then I head this song.. and knew I just wasn't made for this world. :)

Song in head... How do you solve a problem like Maria...

All our longings can be explained away, but not one can be wished away.


Longings are like thirst. Just as thirst can only be quenched by water, not soda, not juice, the longing cannot be fulfilled by anyone else. Just the person/thing/place we are longing for.


Just because there is intense longing today, doesn't mean that the longing, or even the affection, is for forever. It's for today. It's needed in your life today. The place/thing/group/person does not have to be a part of your future. And that's ok.