Why Workplace Diversity is important - and good for business 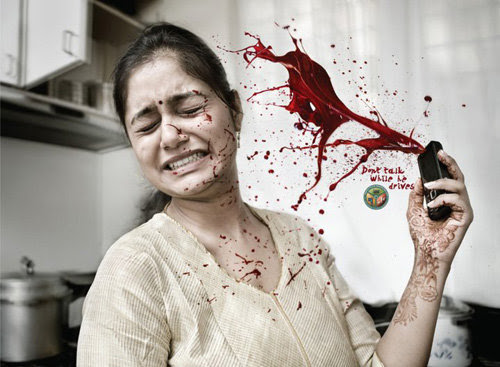 This is the work of Mudra Group, Creative Director: Jonoo Simon and Copywriter: Akhilesh Bagri. Thankfully, we cant tell the name of the client because its literally in fine print. I think that might be deliberate. :-)

The Mudra group is one of India's oldest and most respected advertising agencies. That they should approve this ad comes as nothing short of a shocker, but the employees in question deserve special mention.

This ad proves why Diversity is important. The advertisement is wrong on a lot of levels. But basically, it is wrong because it places the onus of safe driving on someone who is not driving! And absolves the driver of all responsibility for Safe Driving. I am still amazed that an ad like this was cleared for production.

My exact comment on the blog post where one first saw this ad:
**************
Dont talk while HE Drives?? Really? And what is HE? an invalid who cannot take that simple decision of what he needs to do for safe driving? WHo gave HIM a Driving License?

And the visual is very disturbing too. Ridiculous. Someone passed this ad? Really?
************
My guess is, that one woman on the team, or a non Indian team member, would have seen the stupidity of that assumption rightaway. Work like this proves that diversity is not just a pretty concept. Its VERY necessary.

This ad is not just stupid and insensitive. It crosses that fine line into being offensive. The ad creators did not realise that its a diverse world, even if they dont have a diverse team
at 02:14

I agree its not a great ad but come on... aren't you being a little too critical here. The shock value I feel is necessary to get the message across. But then I am the same person who drew fangs on her daughter's pic and blood and gore has never grossed me :)

The ad may seem a little over the top but I guess it does bring out the message on not taking the call when you are driving.

I guess the text needs to be changed to say something like "Do not Nag your HE while he is driving for he may consider crashing into the truck ahead a better option..."

Ah well, dismiss me as another MCP for making a joke out of this visual now or cross over and see the lighter side of this otherwise not so great ad overall.. :)

I am sorry, I beg to differ. This is a matter of saving lives and if anyone can play a part in saving someone's life,then they should. I think it is a new approach towards involving other people (who are not drivers) to be mindful of safety on the road especially when they know that the person they are talking to is a driving. It doesn't matter who puts the phone down first - as far as you do, you can save a life. It might not be the life of the 'him' you are talking to but could also be of the 'him' they are going to hit.

I think it is an interesting take. As far as the offensiveness goes, in our culture, we have become so numb and so insensitive to everything around us that nothing less of 'disturbing' catches our attention. I like it that its disturbing. At least it is going to make me think the next time I am on the phone with someone who is going 80mph on the road.

//My guess is, that one woman on the team, or a non Indian team member, would have seen the stupidity of that assumption rightaway. Work like this proves that diversity is not just a pretty concept. Its VERY necessary.//

I also read elsewhere that they have other ads where all the drivers are mot men and those causing accidents are not all women, but that's no justification for creating an ad like this.

Hi Himanshu and Raaji: If you are a guy driving, when u see this ad, will you think, "Oh, i mustn't take a call while driving?" NO. What will you think? You will forward this to the wife, and to all male friends, have a gudlaff, and tease the wife for ever about "calling me when i m driving" . What is the message going across here?

Hi ihm: :-) And the original post actually saw it being shared on fb among male friends as a joke..

hmm I suppose you are right. I suppose it is a difference of culture. I didn't grow up where you did and here this is a gender neutral issue for the most part. It is very sad though and this is what most Indians would get out of the advertisement :(