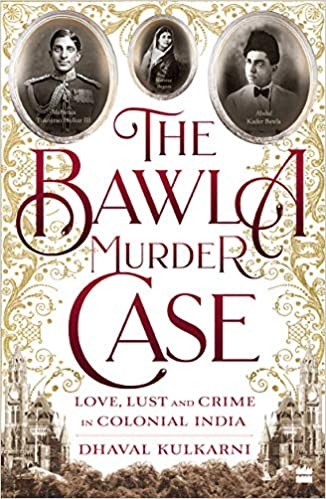 The book starts with attempted kidnapping of a lady and the incidental murder of a Mumbai businessman. That case is solved early enough. The rest of the book then tries to convince the author that the "real culprits" , by association, the Holkar royal family, were not brought to book.

Here is what is good and not so good about the book:

A. Research - The author has really done his research very well. Not just about the main players in the story, but also about the entire ensemble cast - their families, motivations, circumstances, triggers for action, consequences, the works.

B. Lucid and easy writing - The author really has tried his best to simplify it all for the reader by not being too academic. The book truly was unputdownable and left one scratchign their head figuring out all the players and the sequence of the intrigue.

C. Great Hook - Bawla Murder Case is inifinitely more likely to get a reader to pick up the book than a title like - The Scandal in the House of Holkars.

D. The Cover - The Cover design really is excellent.

A. The images - Since this is, evidently, a book about history, using plates or illustrations, even contemporary pictures, would have greatly added to the experience of the book.

B. Presenting the research - That the research is thorough we all agree. That it is presented poorly, is another thing we can all agree upon. Towards the end, the fate of the Holkars, their subsequent marriages and the fate of those marriages - that has been presented neatly and systematically. Everything else feels like being in the middle of a street fight full of he said, she said, they said. Even after the courts have clearly found and punished the culprits, the author goes on to keep insinuating that the Crown was involved but is not able to make the case convincingly. Why a king would be so besotted with one lady in the zenana, is never explained. The nature of that relationship is never explored. Only insinuations. What is worse is, the marital state of the king, or the other members of the zenana are also given scant space.

C. The most irritating part of the book was the author's conviction that Indian princes and princely houses were places of debauchery. Even an indifferent reader of the history of India's princes will know that this narrative is one-sided and presents a rather incomplete picture of the life of the princes, and the Gora Sahibs. If there was debauchery, it was not just on the side of the princes. The gora sahib, the tawaif community, and other stakeholders partook of it and benefited or lost - in equal measure.

D. Even though Abdul Kader Bawla was not married at the time of his death in 1925, Mumtaz Begum is called his mistress and not his partner. He spent time with her, she was carrying his baby, and he died defending her. I think, that an epithet other than "mistress" would be more appropriate, no?

Endnote: I would recommend this book for a short, one time read. It is the truth, but not the whole truth, and definitely not nothing but the truth. Also, this book should be called - The Curious Case of the Holkars. Poor Bawla, just like in the main story, has only lent his name to it, though he had so much more to offer.

hi there, this is an interesting and balanced review. Leaves me not much interested in the book.

hdwk, how about reviewing my book? you can get it on amazon India if you might be interested!